In praise of the bourgeois virtues

Let me tell you a story you've heard before - at the cinema, or on TV, or in pop music. A young, clever person chafes at the tedium, stasis and bigotry of their community and family, whose representatives exhibit a combination of unpleasantness, ignorance and dullness. Some of these representatives are well-meaning, but all are a barrier to achievement, colour, adventure, real life. Through a combination of circumstances, and a meeting with a roguish but good-natured and attractive representative of the wider world, the person strikes out into that world and becomes happy and fulfilled, away from the stultifying expectations of their traditional milieu. This happiness is explicitly achieved through repudiation of, and hostility to, that traditional milieu.

I am not describing a particular film or TV series or song. But in a sense, I am. With various tweaks as required, this is the general framework of many of the stories our culture tells, especially those aimed at children and young people. If it is not the main story, it is a sub-plot or a background assumption. To find happiness and contentment, you must break away from the world into which you were born, and from the people who formed you, and seek your "real self", which is to say the pattern of living that delivers the experiences and sensations which give you pleasure. Rules and ways of life which you did not or would not choose for yourself have no validity or authority; you must decide your own path, in accordance with your own feelings.

Email ThisBlogThis!Share to TwitterShare to FacebookShare to Pinterest
Labels: non-poetry stuff, The Discourse

Why has Remembrance become weird?

Remembrancetide has become a bit weird. I don’t think there is any getting away from it. I previously outlined some examples in this blogpost. This year we have had a restored Dakota dropping hundreds of thousands of poppies over the White Cliffs of Dover. We’ve had a sporting mascot dressed as a giant poppy. We’ve had the usual unedifying squabbles about who did what incorrectly at the Cenotaph. Poppy branding is everywhere.


It’s hard to put your finger on the best way to describe the weirdness. It’s not quite sentimentality, though sentimentality is part of it. Nor is it hyper-patriotism or militarism. I’d maybe describe it as a kind of desperate reverence; an artificial and overwrought deference to any ritual, person or item linked to Remembrance. It seems to be more and more common, for example, to describe all military personnel as “heroes”, wherever they served, for how long and in what capacity. That seems to me to devalue the very concept of heroism. Now, don’t get me wrong: to have worn the Queen’s (or King’s) uniform in any capacity is enormously admirable, and as someone who has never done so I would not like to cast doubt on the martial virtues of those who have. By comparison with my cushy and cosy existence, line infantrymen are extremely heroic. But equally “hero” means, or should mean, something quite exceptional, above and beyond the normal fortitude expected of those who see active service.

James Herriot
There is a particularly wonderful Granville Bennett story in this one, where they fail to go out for an Indian meal and Jim ends up getting absolutely steaming in Bennett’s home pub.

The Lord God Made Them All
James Herriot
This is the seventh in the series and perhaps a little of the sparkle of the earlier books has gone – there is only minimal Tristan here, and no Granville Bennett, and even Siegfried is mostly out of sight –  but it's still very entertaining. The long sea voyage to Klaipeda in Lithuania (East Prussian Memel as was), escorting a cargo of Romney Marsh sheep, and the more risky flight to Istanbul with a planeload of cattle, add an international flavour. One wonders if those parts are based on real events. As with many of Herriot’s tales, one has a sense of an incident that is grounded in reality and in his experience with real people, but which has been embellished and embroidered.

The open society and its frenemies

What do you think of when you hear the phrase “the open society”?


Quite likely you think of Pride parades, or the relaxed immigration laws that have made London a microcosm of the world rather than a national capital. Maybe it calls to mind the bustling, seething streets of the City and Canary Wharf, where brilliant people from all over the globe come to be part of the beating heart of international capitalism. Or perhaps you think fondly of a – real or imagined – deregulated economy, open to competition and innovation and creative destruction.
Here are some things you probably didn’t think of: religious believers being allowed to withdraw their children from sex education classes that they believe to be counter to the teachings of their faith. A men-only private member’s club. Restrictions on the portrayal of sex and violence in media, and on what can be shown in advertisements. Political and fiscal policies that support the maintenance of stable two-parent married families.

Panning for gold in the past: Downton Abbey and the uses of nostalgia 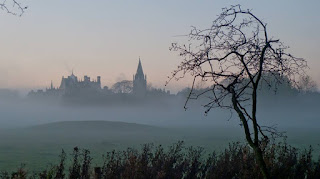 
It was Orwell who invoked that image as an icon of the eternal England. Nowadays it is usually mentioned jokingly or derisively; when John Major cited it in the 1990s he was roundly mocked. As is well known, Good Things in Britain began in 1948 with the foundation of the NHS, before which all was darkness and misery, so to mention Orwell’s vision In The Current Year without a eyeroll and a knowing wink is to invite the charge of “harking back to a non-existent golden age".

Michael Gilbert
Gilbert, who also wrote Death In Captivity, is a good find. This is yet another hit for the BLCC stable. I rather fancy the editors might be getting more discerning. A classic Golden Age closed circle set-up, with a murder in a firm of solicitors, which gives it a faint resemblance to Murder Must Advertise. The firm, and its varied inmates, are amusingly and convincingly portrayed, and the story itself is well-constructed, drily funny, and smartly clued. Our point-of-view character, Henry Bohun, is as a very attractive amateur sleuth, and one might wish he had featured in further novels. A slight weakness, perhaps, in the murderer's motive. But in real life people do apparently kill for very odd reasons.

The Loss of The Jane Vosper
Freeman Wills Crofts
Crofts was not, in my view, one of the greats. He could be a ponderous storyteller, and he often ends his stories with a leaden and moralistic tying up of loose ends, presenting a solution with a dutiful but rather dull third-person account of who did what and when and why. His books are also not really fair-play mysteries in any sense. Nevertheless, they generally remain worth reading. They are well-constructed and engrossing, and his focus on the realistic mechanics of detection makes for a good read. This is a pretty solid Crofts. Through patient and dogged police work, Chief Inspector French runs to earth a nasty gang of thieves and murderers, who have conceived a daring but ruthless scheme. The opening chapter, set on board the eponymous Jane Vosper, is genuinely tense, and the climax is pretty exciting too.

(Decided to do this by quarter rather than for the whole year to make it a bit more manageable.)

Murder For Christmas
Francis Duncan
I don’t know whether I’m feeling indulgent because of the time of year, or possibly even feeling defensive of the Golden Age genre after this Christmas’ dreadful Christie TV adaptation, but I thought this was really good fun, an entertaining slice of escapism even if not very original or brilliant. A Christmas house party is interrupted by murder, and amateur sleuth Mordecai Tremaine – quite an attractive character – resolves the crime. The solution is rather good, if a little far-fetched in some particulars, and is decently clued, but the denouement is the weakest part of the book.

I had a few pieces published in the Catholic Herald last year:

- Why assisted suicide is a dark road to travel.

- A review of Ben Cobley's book The Tribe

"Ignore the critics. It's A Wonderful Life is a wise tribute to everyday heroism", 20/12/18

- A defence of Capra's classic against its detractors

In May, I also wrote a longish piece for the Excvbitor website replying to Peter Hitchens' defence of Elizabethan religious policy.

I could probably pass for a member of the Metropolitan Liberal Elite, if I had to spend an evening undercover at Tate Modern for a Gilbert & George retrospective, or attend one of those famous Islington dinner parties (although I must say that the one and only time I have ever been to a dinner party in Islington, almost everyone there was ferociously right-wing and made me feel like a hand-wringing wet). I went to a pretty good university, I work in the public sector in London, I read and write poetry for pleasure, I like ballet. I favour a redistributive welfare state. I am strongly supportive of public transport, cycle superhighways, car-free cities and renewable energy. I would even call myself an environmentalist, albeit one who owes more to Roger Scruton than to George Monbiot. And of course, at about 9.30am on Thursday June 23rd 2016, in a now-demolished Croydon youth centre, I put a cross next to a box containing the words “Remain a member of the European Union”.

(1) Thursday 4th January
The Mystery Of The Skeleton Key
Bernard Capes
Like the work of Austin Freeman and Chesterton, this straddles the boundary between the late Victorian crime story and the true Golden Age tale. Unfortunately it has few of the strengths of the latter and several of the worst weaknesses of the former – notably a highly melodramatic and over-complicated plot, often ponderous prose, no real clueing (indeed key clues are actually hidden from the reader), and a rather stilted love story which adds nothing to the narrative. It is not without good points and entertainment but is not worthy of the praise accorded to it by, inter alia, Chesterton, who wrote a short introduction to a 1929 reissue of the book.

(2) Tuesday 9th January
The Hollow
Agatha Christie
I now rate this book much more highly than I did a few years ago – I last reread it in 2013. I’m still not sure it quite comes off as triumphantly as it might have done. Christie’s overuse of dashes and ellipses becomes very irritating and the ending feels anticlimactic, while Poirot himself doesn’t have a lot to do (apparently Christie regretted putting him in the story and I’m inclined to agree with her). His acquisition of a country cottage, Resthaven, feels out of character, shoehorned in to the story to get him on the scene – it is never mentioned again in the series, like his “retirement” to the country in Roger Ackroyd.
However, it’s a clever and occasionally unsettling book, a well-told story, probably in my Top 10 Poirots. The solution is simultaneously complex and simple, and crucially does not stretch the suspension of disbelief too far. It is psychologically plausible and the plot emerges from the characters and their attitudes and relationships rather than being something that they exist to serve.